I’d like to tell you about an exciting writing adventure I have been on relating to the natural world. It is an outgrowth of my personal journey through elderhood and of taking the challenge to make my elder years productive and in line with my passions which include studying the natural world and passing my enthusiasm along to children, their friends and families.

It has been my experience that immersing oneself in the “real world of nature,” although a worthy goal, is just not possible for the majority of children and their families today. There are many ways to connect with the natural world and in an attempt to bridge the gap between isolation and immersion, I am engaged in writing and recording a series of short, realistic fiction tales which take the reader into the realm of the hedgerow, field and forest to show our interconnectedness to all manner of life. “Tales of Blackberry Bramble Cottage” support the study of biology and are suggestive in ways to use creative exploration and artistic expression. Readers and listeners begin immediately to awaken their sensual instincts of smell, sight, sound, touch, and taste through imagery and creative thought, thus nurturing their natural curiosity.

“Tales of Blackberry Bramble Cottage” centers on the rural environs of a rustic, abandoned cottage, its neglected floral gardens and surrounding hay fields, forests and hedgerows rich in flora and fauna. I’m hoping to have the first Tale available in both pdf and as an audio recording later this year. I’d love to hear what you think of this sample chapter. Thank you!!

Sample chapter: Chapter 2 ~ Ageless Beauty
I do not understand how anyone can live
without one small place of enchantment to turn to.”
~  Marjorie Kinnan Rawlings, 1896-1953, author 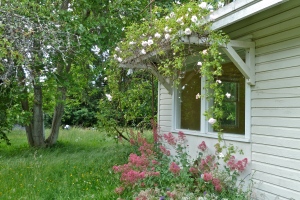 The inspiration for Tales of Blackberry Bramble Cottage

At one time, colorful border plantings surrounded the cottage and an area by the back porch was conveniently laid out for herb and vegetable gardens. Scattered around the lawn were ornamental shrubs, a few cherry, apple and pear trees, several clumps of English walnut and hazelnut trees, and assorted evergreens. Surviving to date, despite the long-term neglect of a gardener’s hand, the starry, lavender-blue Glory-of-the-Snow flowers; dainty white and green snowdrops; brilliant yellow daffodils; shy, purple violets; and white, spice-scented narcissuses appear in the thick thatch of grass out front each spring, creating an oasis of color after the drabness of winter loosens its grip.

There is also a ragged clump of fragrant Lily of the Valley secreted away in a corner by the front porch. Its white, scalloped, faery-bells-on-a-stalk flowers hide among the folds of the plant’s dark green leaves; but one cannot mistake its sweet scent as the sign that somewhere close by, it’s in blossom. In late spring and early summer, the honesty or dollar plants can be found struggling to grow under the eaves amidst last year’s debris. The deep purple, cross-shaped blossoms of these fragrant plants attract butterflies and later their silvery, oval, translucent seed pods attract seed-eating birds

Alongside the western side of the cottage, rambling roses trail off their rotten trellises and toss about in the wind, rubbing up against the windows and leaving grimy arcs on the rain-splatted, dingy panes. In the summer, the rose vines brighten with fragrant, old-fashioned blossoms in shades of blushing pink, rich scarlet and lemony-yellow. Attracted by their floral promise of sweet nectars and pollen, a diverse assortment of insects crawl and hover amid the colorful bouquets and engage in rhythmical dances of pollination and gathering. Through the warm days of summer, the hard, marble-sized green rose hips mature and swell with seed before turning orange-red in the cool autumn air. Birds and smaller mammals await the fall frosts to soften and sweeten the hips at a time when other food sources turn scarce.

On one side of the back porch door grows a bee balm plant, a tall and stately herb attractive to butterflies, hummingbirds and bees. Next to it grows the medicinal and sweet-rooted Solomon seal, spreading its gnarly roots and looking very much like spinal vertebrae for which it has a curative affinity. Perhaps birds dropped the seeds there for one would expect both the bee balm and Solomon seal to be in the area of the herb garden where a few more plants are struggling to grow amidst the choking, weedy debris of past seasons. Spicy peppermints and cool spearmints along with relaxing lavenders, coarse elecampanes, bellicose hot-on-the-palate horseradish, and onion-flavored chives all survive despite the congested growing conditions.

In the surrounding lawn, single and double-flowered lilac bushes in white, lavender and deep purple are favorites of the swallow-tailed butterflies who flit among their fragrant blossoms. A clump of thick-leafed, hardy magenta rugosa roses attracts a myriad of bees each summer as does the profusely flowering, sweet-smelling, white-blossomed mock orange shrubs.

Other plant varieties considered weeds, including some native ones displaced to plant the cottage beds, have reintroduced themselves into the overgrown gardens and lawn. The wary eye is likely to spot the exotic trailing, heart-shape-leafed wild gingers with their secretive purple, long-tailed blossoms; the fern-leafed, pantaloon-shaped wild Dutchman’s breeches; the trumpeted orange tiger lilies, another favorite of the swallowtails; and the ubiquitous white field daisies sporting yellow bullseyes.

Wherever the soil has allowed the roots to penetrate, when the plants have received adequate moisture, and the weeds haven’t choked them out, the deer haven’t eaten them or the bears clawed them down, the valiant plants of Blackberry Bramble Cottage provide color, texture, foods, and fragrance to the grounds. Transient guests of the cottage or uninvited neighborhood fauna regularly visit the untidy landscape gathering the pollen, sipping the nectars or dining on the blossoms, leaves, seeds, fruits, berries and nuts in their season. There are others too, who are attracted to eating those drawn to the plants–– thus bringing a natural wholeness to the evolving cottage scene.

It’s name ~ Blackberry Bramble Cottage ~ came about because a lengthy hedgerow, largely made up of blackberry vines, separates it from the rest of the world; but the hedgerow has grown so much over the intervening years, invading the country lane, that it forms an almost impenetrable barrier. All manner of creatures live in the hedge: birds, spiders, snakes, insects, rodents, rabbits, feral cats, toads and organisms so small you’ll never see them even with a magnifying glass. Numerous guests who stay in the cottage come by way of the hedge. Not that there aren’t other ways to get in, including a gate; which at one time opened upon the lane running alongside the pasture; but it, too, has been taken over by blackberry vines spanning its wooden supports, making entry difficult if not impossible. For those few visitors who do manage to wrangle their way through the rambling hedge or who appear via the trails converging from the fields and forest beyond or who come by wing –– for all those needing a place to rest, there is always room on the grounds of the old farm’s cottage. And for a select few, sparse inside accommodations can be arranged.

Join us now for the tales of Alexander, a young deer mouse (Peromyscus maniculatus) who found his way through the hedge and into the cottage’s broom closet quite by accident; and Sophia, a lovely garden spider (Araneus diadematus) who inadvertently hitched a ride on the wind and ended up weaving her spiraled orbs close by the back door. Both are interesting tales of survival in a complex world of beauty and danger.

Stay tuned for more information on publication and recording as it becomes available. Namaste!